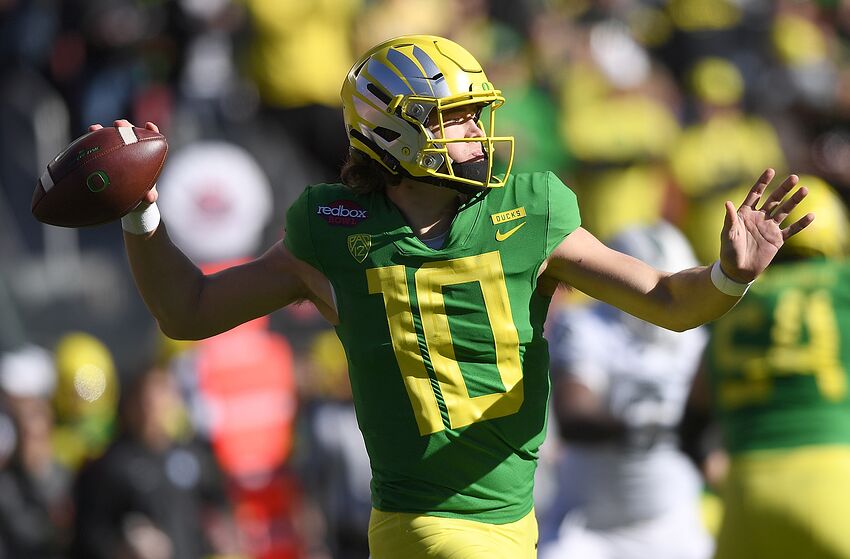 The NFL Mocks Podcast is available on Spreaker, Stitcher, and Apple Podcasts. You can also listen here on this post. To intro the podcast, both Jake and Nate realize how old they’re getting, as Jake is older than everyone in the coming 2020 NFL Draft class.

Next, the guys discuss Justin Herbert going to the Senior Bowl (2:58) and what he can do down there to improve and solidify his draft stock. Then, the guys talk about how they would split up the quarterbacks going down to Mobile (4:45). Also, could Herbert play into the Dolphins favor down in Mobile (6:25)? Also, will Joe Burrow head down as well to work with Cincinnati?

The next news to cover is Georgia quarterback Jake Fromm declaring for the 2020 NFL Draft (14:30). Was this the right decision in a quarterback class with plenty of questions? The guys put their thoughts together, along with where he could end up.

They then move on to the National Championship, where there are a ton of prospects to watch in this one (24:17). Jake highlights Justin Jefferson vs. A.J. Terrell and Tee Higgins vs. Kristian Fulton. Both will be spectacular matchups to watch. Nate talks about Travis Etienne’s ridiculous speed and burst along with K’Lavon Chaisson and the return of Michael Divinity. Also, this is a potential 2020 number one pick vs. the 2021 number one pick. The final note is that LSU defensive tackle Tyler Shelvin is DT1 for 2021, a very good player already as a sophomore.

Finally, the guys get to some questions (35:40). They talk about linebacker risers after Georgia’s Monty Rice returns to school, whether Lamar Jackson is a first-round fantasy player next year, how many running backs will go in round one, and the surprise team to draft a quarterback in round one. Lastly, they both pick the Tigers to win the National Championship.

Be sure to keep following the podcast through draft season, especially while the podcast goes on the road to Mobile! Enjoy!