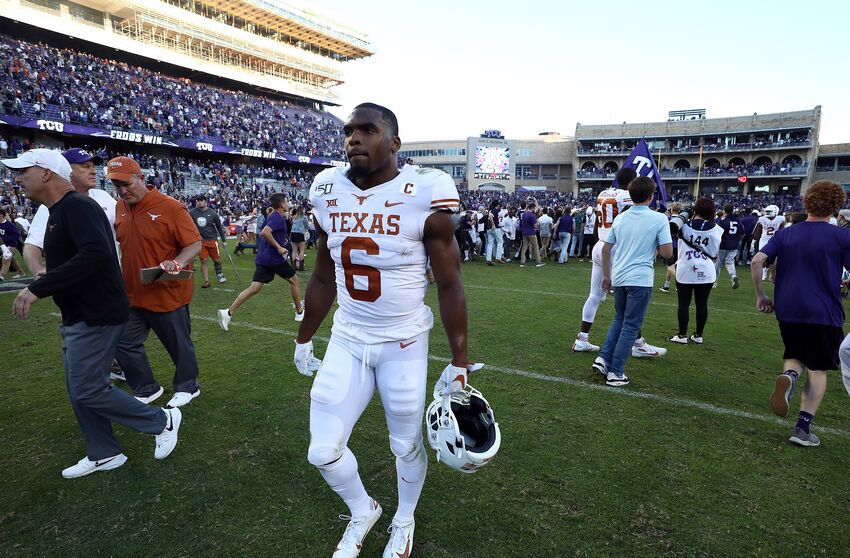 FORT WORTH, TEXAS - OCTOBER 26: Devin Duvernay #6 of the Texas Longhorns walks off as fans rush onto the field after the TCU Horned Frogs defeated the Longhorns 37-27 at Amon G. Carter Stadium on October 26, 2019 in Fort Worth, Texas. (Photo by Ronald Martinez/Getty Images)

Breaking down the strengths and weaknesses trait-by-trait in the scouting report for 2020 NFL Draft prospect Devin Duvernay.

Devin Duvernay is an intriguing name in the 2020 NFL Draft and is a name not talked about as much in draft circles because of the current depth expected in the coming draft at wide receiver.

However, he should be a lot more.

Duvernay enjoyed a major jump in production in his senior season, crossing the 1,300-yard mark. Plus, he has some intriguing traits for the next level.

Here, we will go over every trait this writer looks for when scouting wide receivers. Each trait scores out of a number, and then those will be added up for the final film grade (divided by 10). Let’s get into it.

Route Running: Duvernay doesn’t flash a lot of prowess here. He doesn’t have a lot to his route tree at this point in his career. His best routes at this point are the slant, where he shows some explosiveness off his plant foot, and the seam/nine route going deep where he used his hands to get off contact and win downfield.

Duvernay doesn’t snap off routes at the top of his stem. He still rounds out his in and out routes at this time. If he wants to be a vertical receiver, he needs to work on his hitch route, where he still takes too many steps at the top of the route.

One other thing to note regarding his route running is that he has tight hips, which make cutting and changing directions more difficult. This isn’t where he creates a lot of separation.

Release: There’s not much to go on regarding Duvernay’s release at this point. Mostly faced off coverage in the slot in college, so wasn’t tasked with beating press coverage as he usually had a clean release.

When he’s seen coverage near the line of scrimmage, doesn’t have a good release laterally, but does use his hands well fighting through early contact. Seeing him get pressed down in Mobile will be huge in deciding what his role will be at the next level.

Ball Skills: This is one area where Duvernay thrives, and it might be surprising because of his height. Duvernay is very good at tracking the football down the field and has good enough hands to get them out late and reel in the ball.

He’s able to win in contested situations down the field with good hands and good play strength instead of having the need to high point the ball. Duvernay also has good body control and can sell out and reel the ball in. Hands: This is another strong area of Duvernay’s game. He doesn’t have any issues with dropping the ball, even in contested spots. However, there is a little inconsistency about where he catches the ball.

Duvernay sometimes lets the football get into his frame a little much while other times he attacks it and catches away from his body. That keeps him from a higher grade here.

Blocking: Duvernay is a willing and able blocker on tape. He is often tasked with blocking when not used as the receiver on bubble screens. Duvernay engages defenders well here with strong hands and good placement.

RAC Ability: This is another spot where Duvernay thrives, and is, in this writer’s opinion, his best trait. He’s built like a running back being listed at 210 pounds, and he shows it after the catch. He’s like a bowling ball through contact and can run over defenders while also showing good balance and persistence.

Duvernay also has the elite speed to break away from defenders in open space and take any play to the house. His only knock in this category is lateral agility.

Speed: We’ve already talked about the track speed Duvernay has, and I expect he runs a very good 40 at the combine. He can stretch the field vertically with his speed and accelerates up to speed very quickly. Duvernay can also get by defenders and eat up a cushion.

Play Strength: Duvernay has great play strength for his size. We’ve already discussed his ability to fight through contact downfield and make contested catches, along with his ability to break tackles with his frame after the catch. He’s built like a bowling ball and it shows on tape.

Versatility: His versatility is getting a knock here because I’m not sure about his ability on the outside. I believe the slot is a good spot for him right now where he can get the free release and work up the seam, run slant routes, and run short crossers with his speed. He also has taken snaps at running back and could be used there as well.

A fourth-round film grade isn’t too bad considering the work he has to do as far as his route running and release go. He succeeds in other areas but may need to find an offense where his strength is utilized best. This isn’t a final grade as RAS scores are yet to be given out.

The good news is that this isn’t the end of the 2020 NFL Draft process, and Duvernay has the chance to go down to Mobile and impress scouts and NFL teams by showing he can handle press and showing off his ability to win down the field.

As far as a round projection, a player with Duvernay’s speed will likely go on day two. The ability to get vertical and make plays after the catch will intrigue teams, and they’ll see a player they can mold into a good pro.